More Research and now with Assistants! 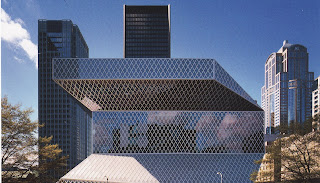 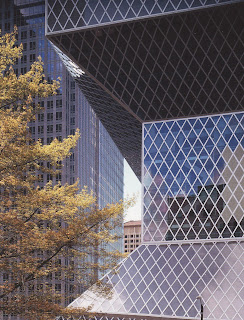 While I work fairly constantly on this project, last quarter was extremely busy, just with my three classes and committee work. I had three preps in vastly divergent areas--something I really like about teaching on a regional campus usually--but this seemed to leave me very little time for Syd. However, I was quick to change that over spring break.

I spent most of it out in Seattle with Hank, but at least one day of that time I was able to go downtown and work in the brand-spanking new public library. What an amazing building it is (see above). So, I had called the day before my visit to ascertain the location of the archived newspapers (microfilm, I suspected) and was told they were on the 6th floor. The building opens fairly late (10am) and because I had to ride into town with Hank and take the Sounder train in from Tukwila very early, I decided to at least find the location of the old Majestic/Empress Theatre where Charlie would have appeared during his couple of tours to Seattle in the teens. I had the address from the great webpage on this topic http://www.historylink.org/essays/output.cfm?file_id=2539 as the SE corner of 2nd Avenue and Spring Street. Well, of course, the theater doesn't exist anymore, but it once had a great view of Puget Sound, I can tell you that. There's a huge newish building on the site now, but I've included here a picture of the building across the street to the north, which seems to have been from Charlie's era, and then the view down towards the Sound. 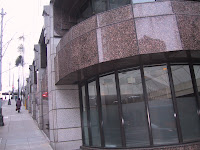 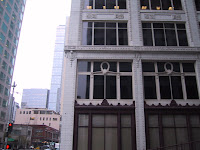 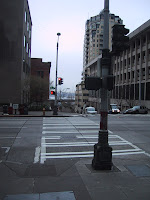 Happily, then, at 10AM I was able to hook up with a nice librarian and spend the next four hours surfing through the Seattle Times for 1906 and 1907. I knew basically that Syd was not out there working the same circuit as Charlie, but I wanted to see what was there--what sorts of acts. Interestingly, James O'Neill, Oona's grandad, was still working the Count of Monte Cristo role at this time, appearing in Seattle the week of November 26, 1906.

Really, this day at the Seattle Public Library just got me stoked for this quarter and working with my new research assistants, Crys and Tyler. Both are receiving 2 independent study credits for their efforts on my and Syd's behalfs. So, when I returned to Zanesville from Seattle on March 25, I spent the rest of the week planning how best to use them and also, how best to keep them interested. Along the way, I did a lot of research work myself, and have planned my research agenda (or have begun to do so) for the rest of the year.

I set my assistants to searching newspaper databases this week and they concentrated on the Los Angeles Times. My idea here was that if the students could make a list of all pertinent Syd Chaplin articles from the Times, then I could access them for free once I get to LA in August and decide which ones I really need. As they were working on the papers, I was working on more genealogy-oriented databases and made some fantastic discoveries. Ship manifests have offered up a lot of information, as have census records. I'm trying very hard to trace Hannah Chaplin back a few generations, in order to add to David Robinson's family tree, mainly because Syd was related to her (of course) but not to the Chaplins at all. So far, this work has been both difficult and illuminating. This week, the students will be transcribing some handwritten documents. Of course, I hope to get their work in this area linked to the documents as they exist in the Chaplin archive, for the benefit of other researchers.

And, of course, besides the actual writing of the book, another aspect of this project is collecting Syd Chaplin. With the help of ebay and other venues, this part of the project continues with new acquisitions at least bi-weekly. Most, if not all of this "stuff" will be used to illustrate the text of the book.

Finally, for this blog at least, my next step is Milan. I'm scheduled to travel there already April 15th, landing in Milan on Charlie's birthday. How appropriate. A private collector there has kindly offered up his collection of 100 Syd letters to R. J. Minney for my research use. Hopefully, that will be a fruitful trip and I will be able to report on it in my next blog.
As for the website, http://sydchaplin.com is fixed for now and contains one or two new items. The Syd Title questionnaire is now working and I hope you will all visit it and make your choice. Also, Richard Roberts has kindly offered the information that Among the Mourners (1914) can now be considered Syd's first released film, because it indeed features Syd (and Chester Conklin), instead of Mack Swain, as imdb so reports. And, Among the Mourners is on the schedule of Slapsticon this year, http://www.slapsticon.org. Signing off!