New York and Beyond 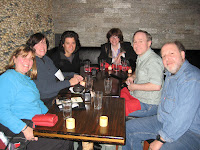 My last research trip occurred the week before Halloween and, thanks to gracious friends and colleagues, allowed me to visit New York City and the Public Library Billy Rose Theatre Collection, to kind of top off my informational gathering efforts. First, a big thank you goes to Michael Cartellone and his lovely wife Nancy Meyer for hosting me in their home for the duration of the trip. They were wonderful and very supportive hosts and I really appreciate their efforts on my behalf. Michael not only hosted me, but accompanied me on my little research trips into Manhattan proper. I can't even get the boyfriend to do that! Thanks, Michael!

Besides the great overview of Manhattan I received from Michael nearly every day, Steve Massa had gone well out of his way to make my trip a profitable one for the book. When I arrived at the Billy Rose Collection on my second day in town, Steve handed me a two-page list of goodies I should gander at there, which he had personally compiled for me. Everyone there at the library was gracious and helpful (well, except for one guy in the Special Collections room, who basically told us to "shut up") and I even managed to meet a librarian who's parents still live here in Zanesville. What is it about Zanesville anyway? No matter where I go, I seem to run into references to it. In Seattle, I found pottery in the SAM collection from one of the Zanesville potteries. On Catalina Island, there was a whole monument practically to Zanesville's own--Zane Grey, who had a house there, I guess. Everyone seems to have heard of it or knows someone from here. I'm thinking it may just be a very blessed place from which to write a book. At least I hope so.

Anyway, Michael and I spent two days in the New York Public Library, the first in Bryant Park and the second at Lincoln Center with Steve. He looked at things Houdini, and I delved into the Syd stuff like there was no tomorrow. At Bryant Park, I managed to download all the remaining LA Times Syd articles that I had not collected from the LA Public Library and that was indeed a treasure trove of stuff. At Lincoln Center there were lots of great press books, programs, clippings and other goodies that helped to answer old questions. One in particular was contained in an article that suggested Charlie had pushed for Syd to be chosen to play the title role in Charley's Aunt. This aspect of the brothers' lives really interests me. I think most of us have some idea of the role that Syd played in Charlie's career, but as I am slowly coming to find out, Charlie seems to have played a very important role in Syd's as well--at least his career as an actor. Of course there is the whole Keystone thing, which is well known, but there also seems to be evidence of Charlie playing some role in Syd's million-dollar contract with Famous Players Lasky and now Christie. All this makes their relationship all the more complicated and interesting.

Friday night was the climax of the short trip, however, as Steve and his wife, Michael, myself, Ben Model, Rob Arkus and Jeni Rymer all met at a great Asian restaurant called Amber for a friendly get together. I can't thank Steve enough for arranging this. It was a great, great evening. Since this trip, my long and busy quarter at school has ended and I have now settled myself in here at home to begin writing. This will be the toughest challenge. I fully plan to complete three chapters and start a fourth before the quarter starts up again January 5th. I will keep everyone posted on my progress as it occurs. Also--ever the optimist--I have gotten two presentations on my Syd research accepted at conference early next year, one on the Gussle character, and one on The Better 'Ole. Part of my strategy here is to make sure I get that part of my work done in time, you know? And, of course, I'm always seeking both feedback and interest in the project, which I hope to also receive at these venues. And, hey, I get to go to Albuquerque and New Orleans respectively.