Finishing up with my Research Assistants

My undergraduate research assistants, Tyler and Crys, finish their last days of work with me this coming week. In their honor, I want to reflect back on the term and recount the successes and failures of utilizing them for this project. Well, there really were no failures, just a few things that weren't as useful as I had planned.

Both students had never done any kind of research assisting before. In fact, if you think about it, this is mostly an opportunity that comes to graduate students and is rarely one an undergrad experiences anywhere. Out at Zanesville, though, I only have undergrads, and since I consider myself an undergraduate professor anyway, I've always wanted to be able to provide some of these interesting opportunities to my own students, if possible. For these two, I was able to get a couple of hours of credit each for their efforts and they paid me back with good attendance and what seemed to be a genuine interest in the task at hand.

Over the course of the quarter, I have asked Crys and Tyler to take turns performing the following tasks: interview transcription, manuscript transcription, Newspaper and periodical database research (online and on microfilm), and film viewing with written commentary. In addition, I tacked on at the end an opportunity for each student to research a small contextual topic that I could then make use of in the book. After I provided a long list of such topics, Crys chose Vitaphone and James FitzPatrick's Traveltalks and Tyler chose Marshall Neilan and the onset of sound production at British International Pictures (which largely concerns Hitchcock's Blackmail). So, two topics each. I think, though, as involved as both topics are, that they're only really going to get to cover one each. Each one is important to understanding something about Syd's life story--especially the last one, which I hope will clear up a lot of questions I still have about Syd's BIP controversy of 1929.

My setup for entertaining research assistants is not the best. I have a small office and no place for a student to get particularly cozy each session and make his or her own. So, each student must feel he/she is under complete and humiliating scrutiny every time he/she comes in to work, although neither one has complained about it (maybe this is just the way I would feel given their situation). I have to say, though, that this proximity has helped me and the project quite a bit. Having set them to work on something right there in front of my desk for five hours a week helps to keep me engaged in the process and also motivated. And, with ten hours total thus spent--sort of forcibly--the project then becomes more a daily part of my life. In fact, I've been working with the assistants four days each week, keeping the whole thing uppermost in my mind, whether I want it to be there or not. What to do, though, now that this ideal situation is ending? How do I keep things on this level of productivity?

Anyway, although I haven't asked my assistants for their required response essays on this experience as yet, I would probably surmise that the film observation/commentary and then the little research projects were the two most interesting aspects. Transcribing in any form is just laborious, and I had to go back over the products carefully myself anyway. But at least most of it is now done! I also found that transcribing handwriting is a real gift--because one of my students just couldn't do it at all!

So, while I won't have time in the fall (I'm teaching 4 classes!) to sign up more assistants to help me, I will at least have one this summer when I go to LA for several weeks. I have that to look forward to. But first is the Library of Congress and Slapsticon. At the LOC, I will be watching several of Syd's films I have not yet seen, including Fatty's Wine Party, Hushing the Scandal, Giddy, Gay and Ticklish, and The Perfect Flapper. That happens the day before Slapsticon begins. At Slapsticon, then, I will get to see Among the Mourners, a film that up until Richard Roberts discovered it, was not known to be a Syd Chaplin film at all and now turns out to be his first ever film. So much for relaxing this summer!
Posted by Lisa at 11:49 AM 1 comment: 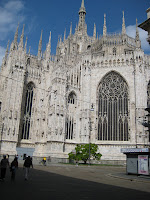 I'm ashamed to admit I've been back three weeks and have not written about my fantastic experience in Milan. I have to admit, I was dreading the journey if only because a) I had never been there before, b) I was meeting someone I had never met (had only emailed), c) Europe is incredibly expensive now and Milan is probably one of the MOST expensive places to go within Europe, and d) I expected northern Italy to be nothing but rain in mid-April. Needless to say, with these worries in my mind as I flew over, ANY type of a trip would have had to been better than my expectations. 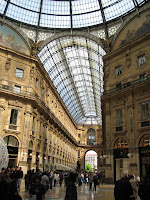 Okay, I had a little trouble getting acclimated to the place, but happily, my pre-work with the map and Google pretty much alleviated that. Second, I had probably the cheapest place to stay in Milan available--especially since there was this huge furniture design convention going on and rooms on Expedia and Travelocity were going for like $800 a night. That's just mad! My room was 50 Euros and clean and comfortable to boot. In fact, I've never had a bad hotel room in Italy--knock on wood! Third, the Gasparinis--the folks I traveled to meet, who had tempted me with their collection of 100+ Syd letters to R. J. Minney--were fantastic. I can't say enough about how wonderful they were and frankly, I'd like to adopt them as my parents. Finally, yes, it did rain a lot, but not on days I needed it to be nice. Sunday, for instance, my only day away from the documents, i.e., the only day I played tourist, was a beautiful sunny spring day. I couldn't ask for more. 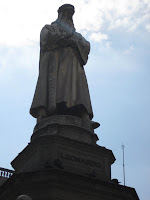 Part of the reason I decided to take the time and expense to go to Milan is because I kind of knew about these letters. A tantalizing few of them exist as copies in the Charlie Chaplin archive. Syd had more than a rational fear of trusting other people--ANY other people--but I knew that of the one or two folks he might trust, British journalist and author R. J. Minney was one of those people. Unfortunately for Syd, I don't think Minney's affection was motivated by much more than the desire to get close enough to Charlie to write his 1954 book, Chaplin: The Immortal Tramp, but perhaps that's unfair. God knows, after reading these letters, Minney paid dearly for that book, because Syd put him through the ringer. I can say now, after reading the letters that Minney was Syd's titular confidante--perhaps his only such--during the very trying years 1929-39, in which Syd tried so hard to clear his name of the British International Pictures and Molly Wright scandals and return to film--all unsuccessfully. The Gasparini collection of letters gave me a blow by blow of this time period, answering many questions long unanswered. They show a whining Syd, an angry Syd, and an irresponsible Syd, among many others, but also a Syd who constantly wrote the refrain, "Well, at least I still have my sense of humour!" So, while I want to save the real goodies for the book, I'll share one of Syd's less "colorful" comic moments:

"Minnie has been looking over this letter & tells me my spelling is all wet. She says there should be two “p”’s in disappointment. I said that two “p”’s sounds like a weak bladder. One “p” should be silent as in “swimming.” Minnie has just looked in the dictionary & now informs me that there should be only one “s” as in $."

I spent everyday but one of my 5 days in Milan pouring over these letters and typing as much information into my computer as possible. My day started rather late for me--8ish, because the Gasparinis weren't open for business until 10AM. So, a quick Italian-type breakfast of brioche and cappucino at a little place across the street from their office and then concentrated work from 10-2PM. Mrs. Gasparini would serve a wonderful Italian lunch at 2--incredible food, or was it just because I was in Italy that I thought that?--and then back to work from 3-9PM. And not a minute of it was boring, either, but then that's my curse as a researcher. I would probably rather be in a room with old documents than anywhere else. Oh, and I should mention, too, that as Syd's biographer, yes, I am skeptical of even these letters. While I believe them to contain more frank information about things than other sources, I am not for one minute lead into a false sense of security about them. Syd was just as capable of bending the truth in letters to Minney as he would have been to anyone else. 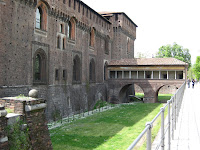 Since my return, my productivity level has been high and working with my research assistants has been an outstanding experience.
Posted by Lisa at 8:28 AM 2 comments: