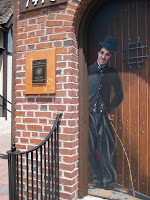 It's high time I wrote up this episode in the Syd bio adventure, n'est-ce pas? Time has gotten away from me, that's for sure. However, the Los Angeles research trip, despite a nasty sunburn and so much traffic it would make your head spin, was an incredibly worthwhile adventure. Most of it I shared with my research assistant Kendra Lisum, a former Chaplin enthusiast and graduate of the University of Nevada-Reno. In fact, we arrived together on Tuesday, July 29th and Kendra lent me her researching services then for ten days. Of course, being her first time in LA, I felt compelled to show her the sites and provide for her enough entertainment so that she would feel the experience was a worthwhile one for herself as well. 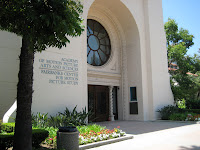 Our first day of researching was spent at the Margaret Herrick Library in Beverly Hills. That first day, we had to learn the ropes of researching at the library, because there are so many little rules and regulations to remember that it sometimes got in the way of our main purpose. This first day, we had an appointment with two different special collections departments--documents and photos. We were to look at parts of the Harry Crocker collection, the Mack Sennett collection, and the Mary Pickford collection. This pretty much took the entire day and so, since we hadn't even accessed the core collection (which is available without an appointment), I knew we would have to spend at least another day or two there. I think the most important items this collection had were photos from films--and there were many. Unfortunately, although I made copies for future reference, I just know that whatever publisher I go with will not allow me more than a handful of photos, so perhaps a Syd photo book is in my future as well. Someone will want to see these beauties besides me--surely. I've included a couple here for your entertainment. 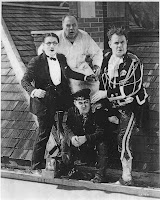 Margaret Herrick also had a great collection of literature--old periodicals and such--and I spent two more days with Kendra and then two days after her departure trying to collect as many mentions of Syd in things like Motion Picture News and The Triangle as I could. Needless to say, I didn't quite get done. But there is more than this one reason for me to go back to LA early next year to fill in a few gaps.

In between a visit to Charlie's studio on one day and to Venice Beach on another, we hit the Warner Brothers archive at USC. According to the two archivists on duty, the reading room we enjoyed was brand new. We even got to sign our names on the door, so I hope ole Syd appreciates the fact that his name in conjunction with ours now graces the door of the WB archive! Unfortunately, what they had to offer us was disappointing. Supposedly, they had legal documents from all of Syd's Warners films, but some were more well-represented than others and none of the files included a copy of Syd's contract, which I especially wanted. The folder for The Better 'Ole was the largest, and even included a list of all actors BUT Syd and their wages, but that was a close as we got. However, probably the best thing we got to see that day came over by way of Ned Comstock at the USC Film archive, and that was the complete script for The Rendezvous, a lost Syd film. Surprisingly, all of the archives we visited graciously offered to make copies of documents (for a price, of course). I was not expecting this, but it sure saved us a lot of time and energy in terms of typing everything into our tired computers. 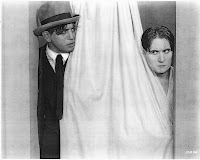 We also visited the Los Angeles County Natural History Museum. This is always a difficult place to get an appointment, for some reason, but perserverence paid off this time. They didn't have much on Syd (they have a huge collection on Charlie, though, if anyone's interested, including lots of props and costumes from the early films), but what they did have was useful--which were the incorporation documents from some of Syd's many side businesses. I learned here that he actually had two incorporations for the airline, for instance.

Of course, any such trip must include a little boat ride over to Catalina Island. I was hoping to find out from the folks that had the Wrigley estate papers about Syd's historic agreement with Wrigley involving landing his aircraft on the island--the first such agreement. No one could help me there. But, the curator of the Catalina Island Museum was very gracious and helpful and provided us with her entire collection of cuttings on the Syd Chaplin Aircraft Corporation as it came to be written about in the Catalina press. This was very helpful information as well.

Finally, and this occurred after Kendra's departure, was my visit to the LA Public Library. My intention here was to spend a good deal of time working with the LA Times archive database gathering Syd articles. This turned out to be time very well spent. Here I learned about Syd's expertise with the golf club--one I'm sure Charlie ridiculed him about--and the fact that he owned a race horse at one time, among many other things. I have to say, even though I know how unreliable the news media can be, spending so much time with newspaper archives has provided an incredible amount of information that I wouldn't have had otherwise. Of course, it has also given me quite a few more puzzling questions to answer in the bargain!

So, in arriving home with my booty and spending a good deal of time organizing it all, in hopes of making it useful, I feel certain that I now have more than enough information to write the entire biography. I know I will have to fill a few gaps here and there later on, but now my most important task is to write the thing. With that in mind, I have suspended research travel (with the exception of one quick trip to New York next week to view the NY Public Library collection) probably until springtime. With six weeks off at Christmas this year, then, my task will be to complete enough chapters with enough polish to start sending it off to publishers by January. And that's a tall order.

Thanks to my cadre of reviewers, however, I can now say that I have two chapters fully written and edited. A third is well on the way. So, as slow as this process has been, I don't think these deadlines are that unrealistic. We'll see.

Oh, yes, I have yet to write about Minnie's film career. That will be next time.