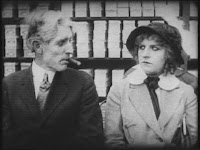 While I'm in the midst of the long first chapter on Syd's childhood, education and career with Karno, I thought I would take a bit of a break and present some information on Minnie Chaplin's film career. It is known that Syd and Minnie performed together with Karno, especially in the show called "Skating," written by Syd, but there is also a photo of the cast of "The Hydro" in which she appears, suggesting that she may have also been a part of that cast as well. Surely, as a part of the Karno troupe of comedians, Minnie received at least a fraction of the tutelage the Chaplin brothers received in every sort of stage business. Even if she hadn't been Sydney Chaplin's wife, she would have been the sort of skilled comedy actress Keystone would have found very useful. 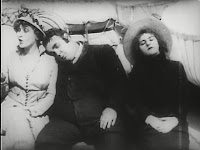 What's surprising, perhaps, is that she was not utilized by Keystone more. But, as it was, Minnie appeared in only five Keystones, all while Sydney was on contract. Her first was a location film, Gussle Rivals Jonah, in which she plays a sort of prudish young woman who is completely disgusted by the sleeping gentleman slouching over onto her. In fact, she plays a similar character in many of the films. She also appears in Gussle's Backward Way, Gussle Tied to Trouble, and Lover's Lost Control. In this last film, she is given a several-minute sequence on her own. Having rebuffed Gussle's flirtations, Minnie's prudish young woman receives his revenge, when he spins a long petticoat to her backside and she, in agitation, must try to figure out how to rid herself of it. Then her final Keystone appearance was a brief second-long glimpse of her in the beginning of A Submarine Pirate--an appearance brought to my attention by Brent Walker. 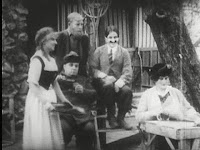 Then, of course, Minnie appears in the cabaret scene in A Dog's Life, in which plays one of the anonymous dancers. One wonders what Minnie thought of life as an actress, and whether or not she missed it.
Posted by Lisa at 6:27 PM No comments: