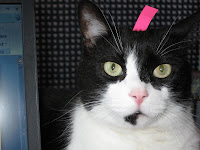 Check out my new research assistant!

Since I'm about to head back to school tomorrow, I thought I would write briefly about the progress I made over the break. It's always amazing to me that six weeks can go so quickly. Despite all of my procrastinating and two weeks in Seattle, I managed to finish two chapters. What I'm calling chapters at this point are really only circumscribed time periods of Syd's life that I can get my mind around. So, some are like 20 pages and some 50+ pages. I envision that the demarkations of the chapters that comprise the finished biography will be quite different from what I'm calling "chapters" right now.

Anyway, I first finished a chapter covering 1932-1937. This is the period following Syd's participation in Charlie's world tour and his becoming comfortable with life in Nice, France following that tour. Much has been made of the fact that Syd never owned property, that he preferred to live in hotels, but that's simply not entirely true--as seems to be the case with much that I'm discovering. Right now I'm having a war with some idiot on wikipedia, who insists on including the nipple-biting incident in Syd's wikipedia entry. But the truth is just not that simple. Matthew Sweet, who wrote the article that appeared in the UK on this issue based his contentions on the hearsay evidence of a ninety-something Betty Tetrick. And that's all. As Syd's biographer, I really wish the story was that simple, but it isn't. It seems good old Monty Banks was involved in a way that none of us may ever be able to figure out, but that's not the only gray area. Anyway, back to my original assertion. It turns out that, in fact, the Chaplins owned a flat in Nice for many years--probably up until Syd's death or shortly before. Of course, it was in Minnie's name initially, which could be the source of confusion, but the address was Palais Rosa-Bonheur and one of the great letters I accessed in Milan, Italy last April gave a lot of information about it and when it was acquired. This has really been my biggest challenge in writing this book: old questions are answered, just as new questions arise. This chapter tries to cover the period up to Minnie's terrible death from breast cancer in 1936, and luckily, the Milan correspondence helped to fill in most of this period.

The next chapter and one I'm still tidying up is the Keystone Chapter. This one is 50 pages and still going strong. Not only am I pleased to say that all Syd's Keystones exist (except for most of Fatty's Wine Party), but a lot of information about this period I was able to get from Motion Picture News, Moving Picture World and a great database of small-town newspapers called NewspaperArchive. As I mentioned before, one of the greatest discoveries for this chapter was Minnie Chaplin's film career. She seemed to be included only in the location films: Gussle's Backward Way, Gussle Tied to Trouble, and Gussle Rivals Jonah. Actually, it's amazing to me how many books have been written on the Keystone studios in general. Two new ones have come out just in the past few months and then, of course, we're all waiting for Brent Walker's book with baited breath. Thankfully, Brent already shared most of his Syd information with me for the book (another gracious colleague), but I think I may try to get up to Madison, Wisconsin to the Aitken Bros. Collection spring break, just to make sure I haven't missed anything.

My next chapter will be about Syd's childhood and I'm more than ready to begin writing it. I think I've come up with some interesting tidbits for that period of time that everyone will be interested in. Happy New Year everyone!
Posted by Lisa at 4:46 PM No comments: