One of the most enjoyable and challenging resources for the book has been the family, or at least those members of it that have so selflessly agreed to have me grill them with my inane questions. Family members I have been lucky enough to interview over the past few years include Michael and Christopher Chaplin, both of whom I interviewed during the Cinema Ritrovato Festival in 2007, Pauline Mason who is Charlie's cousin Aubrey Chaplin's youngest daughter and Betty Tetrick's half-sister, in December of 2007 and then Geraldine, just recently at her home in Miami Beach. Each of these interviews gave me a unique perspective on Sydney, that I wouldn't have been able to get from any book, letter, or archival document.

Michael's interview was interesting, because although he started it by saying he really remembered very little, as the questions continued, it was clear he was remembering more and more--like Sydney's fondness (and ritual with) cigars and he and Gypsy's habit of visiting the pawnshops each morning around the casinos--their method of adding to a large collection of gaudy jewelry very cheaply.

Christopher, who would have been three when Sydney died, talked to me about family folklore regarding his uncle. I especially appreciated this perspective, because it helped me to see how much of this folklore had made it verbatim into the scanty literature already in existence about Syd--say in David Robinson's wonderful bio or Charlie's own autobiography. One question I can't get anyone to confirm to me is why everyone thought that Syd was Jewish. There seems to be absolutely no confirmation of this anywhere, and in fact, Syd himself liked to tell jokes about the race. Christopher told me that the folklore included a belief that Sydney's second wife was also Jewish. Amazing how these rumors are proliferated!

Pauline Mason, who was in her early 80s when I interviewed her, looked positively wonderful. She had big beautiful photos of both Charlie and Betty throughout her house and really only wanted to talk to me about those two folks. I know from his correspondence that Sydney and Minnie did quite a lot for Betty and Pauline herself had several wonderful photos of Syd, perhaps passed along from her father Aubrey, but she could remember very little about him, or his second wife Gypsy, with whom she visited quite often after Sydney's death. I mean, she remembered the great honor of being invited to stay with Gypsy at the famous Beau Rivage hotel where Gypsy lived and all of that, but remembered very little of Gypsy's stories. She did remember Josephine's wedding, however, in incredible detail--obviously one of the few Chaplin family events she was invited to attend. Anyway, I enjoyed meeting Pauline and her daughter that cold December day outside London, I enjoyed our lunch at the local pub, and an afternoon of conversation, but I gleaned very little about my subject for all my trouble. 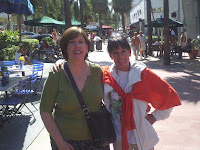 Finally, I have recently had the honor of interviewing Geraldine about her uncle. I took along two full pages of questions and, in the end, came home with an entirely different collection of information than I expected. She couldn't answer the questions about all the scandals that I had. Unbelievably, that information just doesn't seem to have made its way through the generations, and I think Sydney would be very happy about that. She provided me, however, with some very vivid and detailed stories of Sydney's visits during her childhood, complete with a couple of verbatim jokes of his. Gypsy she remembered clearly as well. And it is these sorts of stories that will help me to fill out the final chapters of the book, making the elderly characters "Sydney and Gypsy Chaplin" fully fleshed out and realistic ones.

I can't thank these folks enough for allowing me to usurp their time and memories in hopes of enhancing this project with the results. And, I can't thank Kate Guyonvarch enough for making most of these contacts possible.
Posted by Lisa at 4:19 PM

Wow! Getting to interview Geraldine must have been a bit thrilling. Upon meeting her, how many seconds did it take to mentally gain your composure? I guess this same question would apply to meeting Michael also. You lucky girl! It looks like you are enjoying every bit of this.