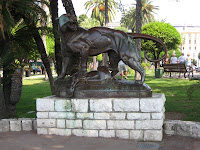 I decided earlier this year that I needed to go to Nice for a couple of reasons. Next to the area in Switzerland around Vevey (namely Montreux), Nice is the place Sydney spent most of his adult life after 1929. He owned a flat there in the Palais Rosa-Bonheur, one that was in Minnie's name while she was alive, but was later in his name. In his later years, he lived in Montreux during the summer and Nice during the winter, staying at the ritzier hotels in both places. He died on Charlie's birthday in 1965 in Nice, at the Hotel Ruhl, which has since been replaced by a very ugly casino. Minnie also died in Nice. So, I needed to go there. I felt, if nothing else, that perhaps I could channel Sydney there more than in any other place.

So, this summer I went. Lucky for me, a year earlier, I met a resident of Nice online. Jean-Paul Woodall, freelance maker of books and films, contacted me about a film he was making on the former Provencal Hotel in Juan-les-Pins. Lucky for him, I had quite a few candid photos of Charlie at this hotel, because in the 1930s it was owned by Gould and so, Charlie stayed there with May Reeves for free during his European tour. I provided the photos for the film and an accompanying book. I was already hatching a plan to go to Nice for the aforementioned reasons, so I mentioned these to Jean-Paul. He immediately offered his help. A year went by. I contacted him again and he was still willing to help. So, he became my guide and research assistant during the week I just spent there in late June.

Jean-Paul helped me navigate the local archival collections. There are two municipal archives in Nice, both just like you might picture--old buildings with ancient archivists rattling around the dusty halls. Well, I got no help at either one, mainly because what I was looking for was not to be found there. Instead, the Archives departmentales des Alpes-Maritimes was the place for me. It was well out of town, about a 35-minute bus ride, but once inside it had a great range of databases, including many of the newspapers of the period. I began looking, not just for Syd, but for any mention of Minnie's demise or death. I had a range of dates--late July to early September, 1936, but no specific date. I managed to search every day between those endpoints while I was there, to no avail. Obviously Sydney managed to keep Minnie's death out of the papers. 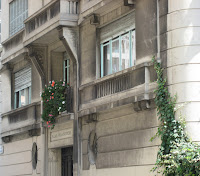 An archivist there asked me to fill out a form that would provide him Sydney's name and dates, and the same information for his two wives. One of the services he provides then is to look up anything and everything in his collection on these people and send them to me--free of charge. But, immediately he ran into problems. There seemed to be no record of Minnie's purchase of the Palais Rosa-Bonheur flat in 1931, or any other legal record in the system. Later, we were to find out that part of the problem was that Minnie was Minnie Gilbert, not Minnie Chaplin. So, more intrigue. But Jean-Paul was unable to find her death certificate for me until after I had already departed. Yes, it was that difficult.

Besides the ambiance of Nice that I was enjoying, one of my other great discoveries was the apartment building itself. It still existed, sitting as it does just half a block from the ocean, way down on the Promenade des Anglais. It's a beautiful Art Deco building. Jean-Paul, however, working some of his usual magic, called everyone in the phone book listed for the building and actually connected with the current owner, a M. Berthoud, who was the same owner at the time Syd and Gypsy lived there. Well, the current owner is probably the grandson of that person. Anyway, he contacted the elderly couple living in Syd's apartment--the penthouse apartment on the sixth floor--and low and behold, they invited us in! It was an amazingly beautiful place with mosaic tile floors, crown molding and a balcony going all the way round the apartment. It was very spacious too, and even with the new building development between it and the ocean, it still had a fine view. It was an amazing afternoon for me.

Really, just being in Nice (my first visit) was an amazing experience for me and helped me to understand my subject more than I have. He truly lived a life of affluence--and leisure, despite the demise of his film career. I don't think I truly understood that until I came here. 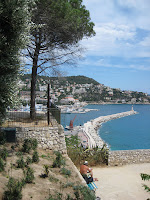 So, now I'm home again, after a productive trip, ready to continue writing. My goal now is to have all but two chapters completed by the end of the summer, and this goal is in sight. The childhood chapter is done and the Karno chapter is on the road. It's almost time to send sample chapters to publishers, I think.
Posted by Lisa at 4:09 PM