It's all over but the crying... 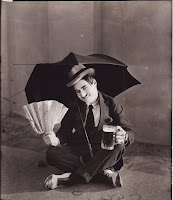 In honor of my mother who died ten years ago today, I was able to get a query package off to my first-choice publisher, complete with well-polished sample chapter. So, Syd is on the road, so to speak. Does this mean I sit on my laurels or buff my nails? No. I have three more chapters to write--and an intro and also, I mean to submit queries to at least two more publishers this month. It's kind of like applying for a job, though, in that each one wants something different from you. The other two I'm interested in want a traditional type of prospectus and one also wants the introduction, which I haven't written. So, what with my other responsibilities--an article for the Ohio Historical Society on Charlie and a presentation for Iola coming up next month--I think it may be October before I can get the other two in the mail. Ballpark four months waiting time to hear from any of them, so that puts me into early 2010. It would truly be nice to have the book finished and a publisher interested well BEFORE the Chaplin conference comes along next October, but I truly doubt that's going to happen. Who knows.

My next chapter will be on Syd's old age years. I probably have the least amount of day-to-day information on that time period, so it shouldn't be terribly taxing to get that completed. That will leave two chapters for which there is the MOST information--the ones involving Syd's working at the Chaplin Studios as business manager and then embarking on a solo career, so 1916-1927 or so. These were ten very busy years for Sydney, and I have a lot of information I've collected that needs to be organized before I begin writing.

Over winter break, which is still six weeks, thankfully, I will be traveling one last time to London to try to find some specific bits of information, mainly about Sydney's time at British International Pictures. I have a couple of days of appointments at the BFI and then I hit the court records. I'm also hoping to interview at least one of the two great nephews of Minnie's that have contacted me lately. (Thanks to these men, I now have a lot more information about Minnie).

So, after a summer of spotty writing and research, I'm not totally unhappy with my progress. People ask me, after all this time, how I really feel about Syd. The answer is complicated. As a biographer, you spend so much time researching and getting to know your subject--both the good and the bad about him--yet, despite it all, you can't help to find something endearing. I can say that's true for Sydney. I know his nieces and nephews loved him very much, his wives did as well--despite everything--and it is clear that Sydney and Charlie's relationship was one for the ages. So, who am I to judge Sydney Chaplin as this or that. He had the love of his family, and not everyone can say that. Yes, I'm quite fond of him now and expect to remain so after this is all overwith.
Posted by Lisa at 5:45 PM

I wish you luck with the book. It's too rare that we get to hear the stories of people like Syd because they are very rarely centre stage and so are forgotten.
Most every day of the week I pass by some area touched by the Chaplin's be it East Street or down Kennington Road (both areas with plaques remembering Charlie) so your book will be another must have edition.

Thank you! I was just in your part of the world and was even in Kennington--probably passed you on the street!

Thank you for your wonderful blog and for bringing Sydney closer to me! I found out so much on here and on your homepage! Thanks for all the effort you put into your research!